The Civil Supplies Department discharges the important responsibilities of Public Distribution enforcement of markets discipline and promotion of consumer awareness and protection of their interests. The Public Distribution System came into existence in the state with effect from 01/07/1965. The state which has very high deficit in the production of food grains, the PDS has great relevance and importance. Keeping in view the importance and need of promotion of consumer awareness and protection of human rights, Government have formed a separate wing in the food, Civil supplies and Consumer Affairs Department in the secretariat to attend the subject, Consumer Affairs. Similarly a Consumer Affairs Cell has been formed in the Commissionerate of Civil Supplies also.

The functions carried out  by  the Department  can be broadly divided into the following three categories. 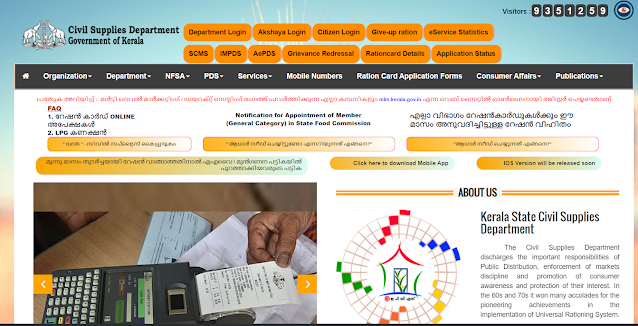 1) Control of Rationing and marketing of essential commodities

In the state,which was very high deficit in the production of food grains,the PDS has great relevance and importance.Timely lifting of commodities allocated from central pool and ensuring distribution of the same through more than 14000 ration shops and ensuring timely lifting and distribution of tha same is a major function of the Department.The Department keep vigil to discourage  and prevent hoardings and black marketing of essential commodities.

Keeping in view the importance and need for promotion  of consumer awareness  and protection of their rights,Government of Kerala formed a seperate wing in the Food Civil Supplies and Consumer affairs Department in the secretariate to attend to the subject,Consumer Affairs.This wing works under the Additional Secretary to Government with supporting staff.Accordingly a Consumer Affairs Cell has been formed in the Commissionerate of Civil Supplies also.

Distribution of kerosene is governed by the Kerala Kerosene Control Order, 1968 promulgated by the State Government under the essential Commodities act, 1955. As per this order, sufficient number of Kerosene Wholesale Dealers (KWDs) are appointed by the District Collector concerned and these KWDs lift the stock of kerosene allotted to them every month by the Departmental Officers from respective companies, IOC, BPC, IBP and HPC and make it available for distribution to the ARDs who in turn lift the stock allotted to them and distributed to the card holders.The scale of distribution is 0.5 liters per month for electrified houses and 4 liters per month for non- electrified houses for lighting purposes.  2532 kl Kerosene is  issued as for  fishing purposes minimum deposit of Rs 2500 at their order.

Ente Ration Card is an initiative of Civil Supplies Department of Government of Kerala. This app provides details of members in a Ration Card, Application Status and monthly quota. 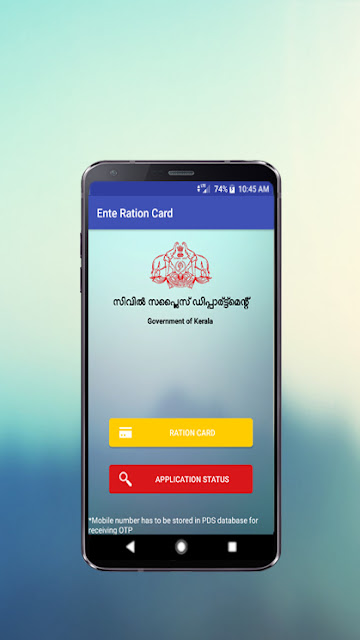 Description and other relevant details

Get details of all members in the Ration Card

Enrolled users can view the complete details of their Ration Card